This is a nice frame. But the disadvantage is that it is short. Not placed in a context and giving a “positive” value which might be not correct.

The Marshallplan for example. The general idea is that this plan did take care of recovering or rebuilding Europe after the second world war. The Europe that was more or less in ruins. That completely needed to rise from its ashes.

However some nuances are as with everything at its place. The Marshall plan was from 1948 to 1952. Allready before 1948 , namely end of 1947 , the production level from England France and The Netherlands was allready on the level from before the war. For Germany it was a plan that made a reasonable difference. Not all countries in Europe did profit from the plan. Spain was not involved. The countries in the area of influence from the Sovjet Union did miss the boat as well. This because the Marshallplan was a mean to confine the influence of communism. Amerika did make demands in order to participate. For Italy and France it consisted of the measure that communistic parties should be removed or kept out of government. It was close to the fact that Dutch soldiers should have to fight in the Korean war. The Marshallplan did take Europe in the international economic global move of the Western world. It did give prosperity but mainly in  the material way.

For the European countries the Marshallplan was reasonable simple to manage. There was one party , Amerika , who was giving the aid. They ofcourse had their whishes. In negative cases we call it demands. But the media will paint that picture. Money always puts a nice appearance over matters.

This brings me to another continent , Africa , that is already receiving aid for decennia. Latin America falls within the same problemacy but there it is going somewhat better. So it is about development cooperation.

Lots of Europeans do think in this case of the Marshallplan and their colonial past. From their colonial past I can mention lot of cases from which they should find them selve guilty. Things that have happened to earn money from Africa. Their raw materials , slavery , exploitation , violence and more. The generations before us made quite a mess of it. I do find myself guilty  about that. With my current healthy mind I am now thinking: What where they doing?? Was there no healthy common sense in those days? I culture more important than common sense? The creation of riches for a few more decisive? Humanity only a creation of already achieved wealth? Psychologists should dive into this matter. In my opinion it is within the culture. It is just a pity that the best cultures are nt the strongest ones. That makes it all complicated. We are however from a different generation and should let go of the past and put it in perspective. In a respectful way/

This brings my to the aid and corresponding plans which we are applying already for decennia to the African continent.

It seems wise to have a look at the Marshallplan. Our government had the luck that there was only one party , America , was involved. This is for the countries in Africa completely different. There are many donor countries and even more ngo’s who would like to help. Imagine the situation that you need help open your front door and see a group of hundred people or more. One is giving you this. Another gives you that. Some ngo’s are even using their elbows to get in front of line. You would like to receive structural budgetary help. But the donor countries change their policy with every new election. Ngo’s mostly give aid on a certain area. Water , clothing , food , education etc….. In short based upon a theme and only shortly. Sometimes also not to you but only to your children so to say. Just give me a regular and structural contribution till the problems are solved is what you are thinking. I know best how to spend it in a right way. You can check me if you want but in the chaos of the offered help I am drowning. With me my family , relatives , brothers and country so to say.

This is more ore less the story of what is happening right now. For more details I can recommend the book: Lost in chaos / Verloren by Karel van Kesteren. 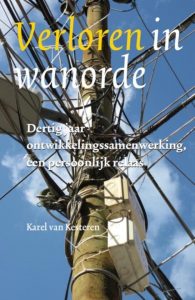 Than you will get a better insight of for example bilateral and multilateral aid. How efficient things are going. Just keep in mind that from every 150 billion spend 50 billion are waisted. This is also going to happen with the money we are putting in the energy transition.

The Declaration of Parijs should therefore be much more respected. But the ngo’s do not have to follow this declaration. Some western countries , like America , have their own agenda. Ngo’s have already so much power that they often only follow their own business model. I would be critical with donations. Deepen yourself in the subject and you will see that they often bring more chaos than there already was. One should maybe control all those ngo’s in an objective way by f.e. the United Nations and give them a quality mark.

For more information on ngo’s I recommend the book The Crisis Caravan / De Crisis Karavaan by Linda Polman. She is shortly publishing a new book on this as well.

One thought on “Development cooperation , the Marshallplan but than different.”